Ona is growing. She’s up to 16 lbs and is now in the 25th percentile weight wise, non-adjusted. At her 1 month we were at the 3rd percentile for weight. She’s crawling and building speed. Milli and her have an interesting relationship. Ona LOVES Milli and will do anything to play with her. Milli will get close enough for one or two pets before cozying (is that a word??) down just out of arms reach. Now that Ona is more mobile, Milli is getting more exercise:)Here’s a picture of Milli trying to get in the playpen to play:

Here’s a picture of Milli in her summer cut. This is just prior to the first and only time so far Milli batted and hissed at Ona…with good reason. Ona grabbed her tail and wouldn’t let go. BTW, this is Milli’s spot…right by the vent: 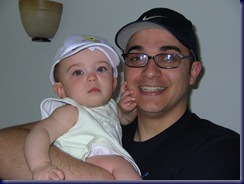 The weather is so nice lately. Above are some pictures before a big walk and day outside. We don’t have too long before it’ll be TOO HOT to enjoy the outdoors:( Stupid hot ‘lanta.Today was my first Mother’s Day. It was really special. Ona got me a new running hat, Eric a yoga mat bag and Milli got me a I-tunes card:) Eric made chocolate chip waffles for breakfast. Mmm. I got so many happy texts, emails, and cards. I even got a text from my friend Zai from grad school. A good day:)In the morning, Eric found a baby owl in our driveway. It was about the size of my two fists put together. After consulting Josh-the nature expert and Mama Donna-the animal expert, we took it to the Chattahoochee (how the heck do you spell that??) Nature Center to get checked out. It was an Eastern Screech Owl. Apparently, it wasn’t injured and they instructed us to put it back outside at night so it’s mom would come find it. Eric put it next to the house in a safe place. When I put Ona down for bed, I heard it outside calling for it’s mommy.

[from Eric] Here is a video of Ona on the bed in the hotel last week. If you get bored, move to the end, it’s got a funny Ona style ending.